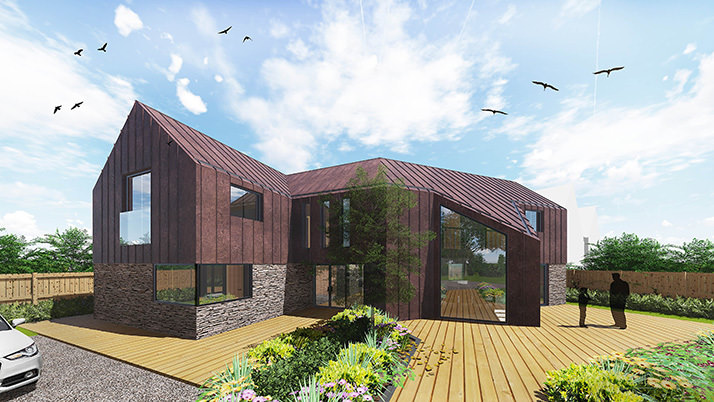 Our scheme for a new two storey home in the village of Blunham, Bedfordshire has been given the go ahead by Central Bedfordshire Council.

The site, situated to the east of Grange Road, lies outside the settlement envelope boundary of Blunham and is deemed located within the open countryside.  Grange Road is predominantly a residential area which contains a high number of large detached properties which are set back from the street.  The site was considerably overgrown and occupied by a high number of large character trees which were to be retained.

A key consideration was the integration and relationship of the proposed dwelling with the site and surrounding context. A primary and secondary axis were identified as being key factors in the design development. The primary axis, parallel to the northern boundary responds to the point of arrival into the site. The secondary axis, perpendicular to the south-eastern boundary of the site relates to the long views across the front and rear gardens.

Whilst the dwelling employs a traditional form, contemporary elements such as the large glazed openings to the entrance and dining area have been incorporated into the design.  The use of stone as a facing material and a metal standing seam upper wall / roof finish, together with the scale and proportion of elements and openings, reference the agricultural buildings and industry in the surrounding area.

Do you have a project in mind?